Yep. I've done it again. I made another font. But this one's slightly different. And if you don't care for the article, grab it at GitLab 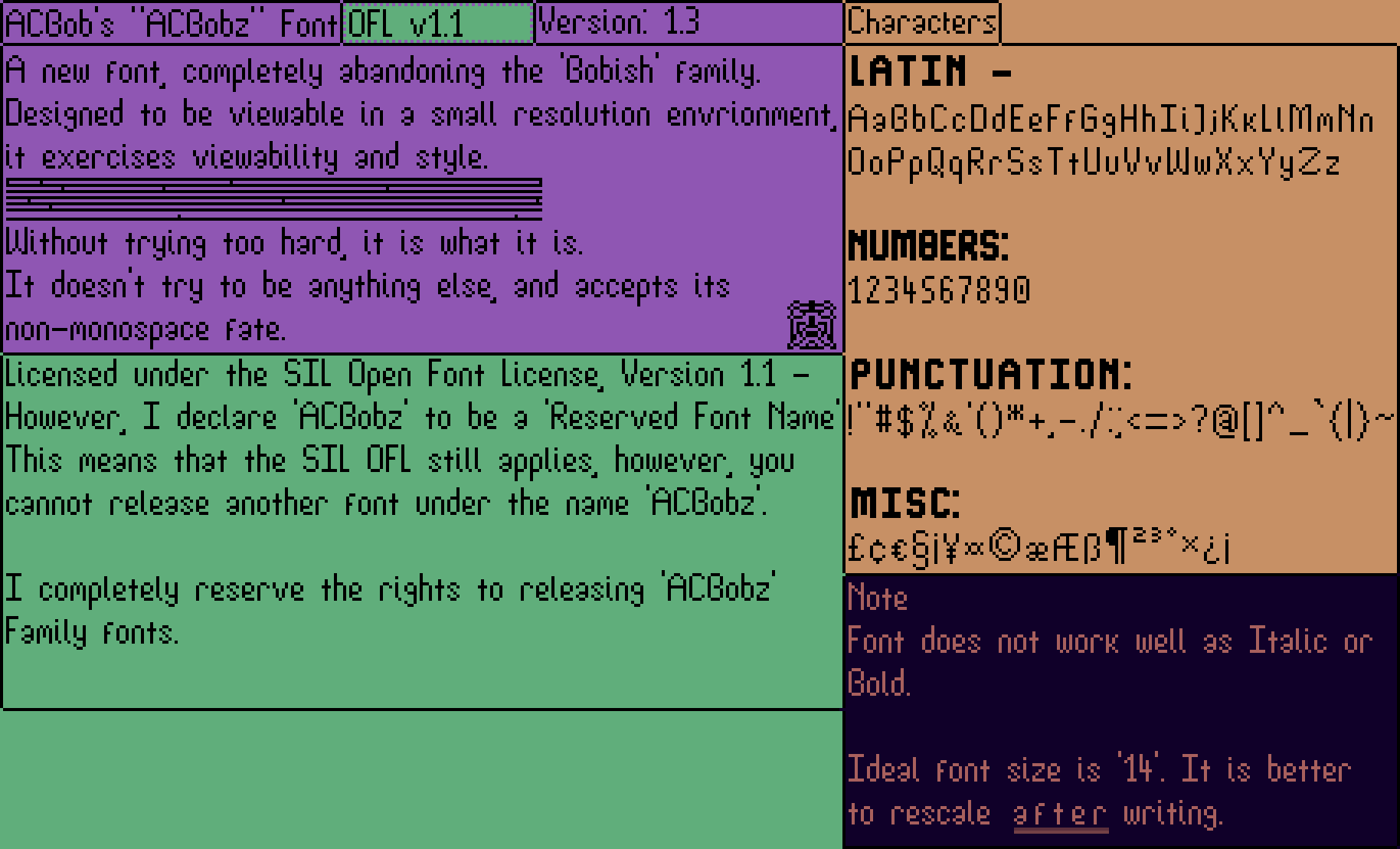 As you can hopefully read from the image, ACBobz (Also acceptable: ACBob'z) has been designed from the ground-up. No more different Bobish variants.

Bobish was great at the time, it was my first font, and it taught me quite a bit. I'd tried multiple times to improve it. Going steadily from v1 to v12! In that time, it became monospace, prompting the first variant - 'Bobish Fluxuspace'. It was also good enough, and attempted to be more readable, but Bobish had a few flaws.

For one, Bobish tried way too hard. It thought it was great, purely because I made it. For second, from a style-perspective, it was all over the place. Some characters had serifs, others were sans-serif, and others just didn't look good.

So that brings us to ACBobz. The new font. Perhaps, a new font family? The future is yet to say. - Trying to rid myself of the sins of Bobish, I'm not even going to force it upon poor visitors of my site. Additionally, I have properly licensed it. Bobish was confusing, And I now deem Bobish to be Public Domain. However, ACBobz is properly licensed under the SIL Open Font License. Containing a FONTLOG.txt and copy of the License as-well.

It has a more consistent style. Being sort-of rounded, while also having flattened areas. The punctuation needs work, but it works at the moment. With the consistent style, it also has a consistent font-weight, which is something Bobish really struggled with.

That's it for font-specific things. I'm now going to talk about the benefits for me, of making fonts.

This whole experience of making fonts (Both Bobish and ACBobz) has been fun over-all. I get to release my own interpretations of the English alphabet, along with improving my pixel-art skills.

An issue I have in the physical world, is my hand-writing. I believe i may have some form of dysgraphia, so constructing letters is rather difficult for me. However, after Bobish, i noticed a definite increase in the quality of my hand-writing. Bobish forced me to make a readable typeface, so i considered things like Spacing and Construction. Even when making the individual characters themselves, i would occasionally go 'Hang on, how would i do this with a pencil?', And that helped to contribute to changing my 'bpdq' letters, as well as 'gy' and 'a'.

Over-all, i think making these fonts has been a good thing for me.